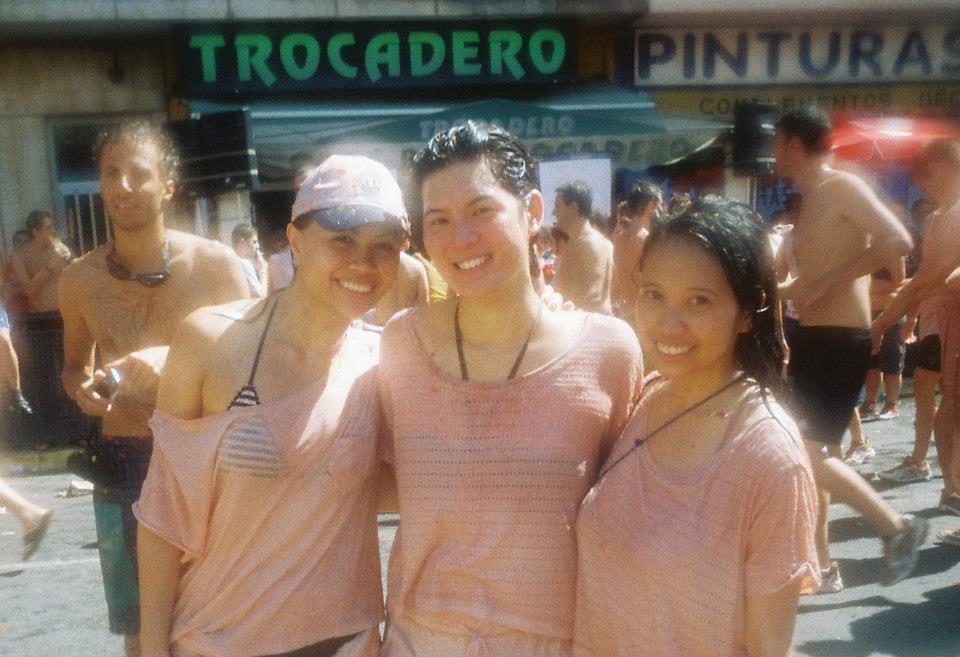 It’s not everyday that you have the opportunity to partake in the world’s biggest food fight. So when I heard about La Tomatina, it went straight onto my bucket list. Little did I know what I was getting myself into. Having already been to Valencia, this second trip out there was purely for the tomato fight – so you can only imagine the effort I was willing to go to in order to be apart of it all.

Not realising that this involved a 5am start on the day (to make it in time before they closed the town off), I woke up feeling sleep deprived and sluggish from the KFC feast that I devoured just hours earlier – not a good combination at all! Note to self: Don’t ever eat fast food that fast again…especially past midnight. Despite the poor state that I was in, I decided to soldier on because I’d already come this far. Reached the train station and it seemed that everybody had the same idea. The queue for the ticket machine went on for what seemed like forever. Since we had already purchased our ticket from another station, we were able to skip straight past the massive queue that formed – luckily!

Arrived at the site at about 8ish to reserve a spot right in the thick of it. There we stood witnessing people with their many failed attempts at detaching the ham from the top of a greased up pole – to which the fight can then begin if successful. That or when the clock strikes 11 – whichever comes first. With no possesion of any form of gadget to tell the time, it felt like ages standing under the hot sun watching everybody in a frenzy, all with the same determination to get a hold of that leg of ham. Hours past as we saw numerous guys and girls charge at the slippery pole in the hopes of making it to the top, only to slide right down amongst each other. It was quite hilarious. This one girl was completely oblivious to the fact that her breasts were revealed to all as she made her way up the pole. Think the guys were more disappointed when she didn’t succeed. Taking pole dancing to a whole new level. A treat for the girls however, would be the upper body strength of the guys, showcasing the definition of their arms and backs. Well, I guess I should speak for myself. There’s just something about a toned, ripped up body that gets me *sigh*

The chaos begins at the sound of a loud bang where trucks begin to make their way through the narrow street. This is where everybody makes way for the vehicles by squashing up against one another against the walls – not a great feeling! I didn’t realise just how crowded it was going to be. We could barely move as the trucks were loaded with people pelting tomatoes down at us. And gosh..I didn’t realise the tomatoes stunk of a sour, awful scent. Gross! Other than that, it was quite fun pegging tomatoes at randoms and watching their reactions as they try to spot who targetted them. All in good nature.

Before I knew it, the fight was over and everybody was in a mad rush to get the hell out of the vicinity. Unlucky for us to be caught up in the human stampede. It was absolutely manic! It seemed like a whole lot of effort for 1 hour of play. Would I be in a rush to go again? Probably not! Definitely worth a one time experience nonetheless!